96% of supply chain companies surveyed by the coalition Coalition say that a contract for the construction of the wind farm would enable them to create new jobs, with 10% of these saying they could each create up to 50 new posts.

Additionally, a massive 96% of companies say that this would allow them to create work for other local companies, with 24% of these stating that these contracts could each be worth more than £250,000.

The statistics are revealed in the results of a survey of 50 supply chain companies carried out by NnG Offshore Wind Farm Coalition over the last month.  The coalition consists of a group of companies that has come together in support of the 450MW NnG offshore wind farm – a £2 billion development planned for construction in the Outer Forth Estuary. 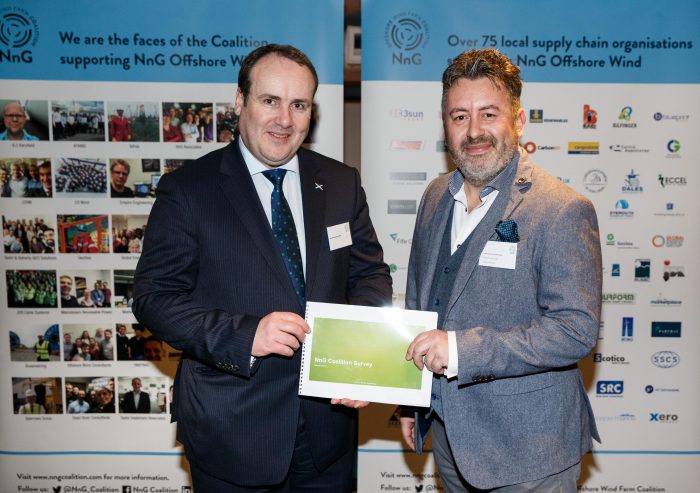 Significantly, 62% of the survey’s respondents said that they had been affected by the downturn in the Scottish oil and gas industry, with 60% already having invested in training and skills development for their workforce in anticipation of the growth in the offshore wind sector. And while offshore wind in Scotland accounts for less than 10% of the majority of companies’ current workload, 14% of respondents stated that a contract for the construction of the NnG wind farm would account for 91%-100% of their work going forward. 68% of respondents said that they would be prepared to invest further in people and equipment for offshore wind.

Commenting on the results of the survey, Alan Duncan, Convenor of the NnG Offshore Wind Farm Coalition, said:

“We believe that this is the first time a survey of this kind has been undertaken in Scotland and the results clearly show that the country’s offshore wind sector really is an industry in waiting.

“The NNG Coalition now has 75 members and the survey shows that the vast majority of these organisations would not only employ more staff if contracts were awarded, but that their local supply chains and local communities would benefit significantly too. These results are very much aligned with last year’s study from the Fraser of Allander Institute which estimates the NNG project alone will create 2,000 jobs for each year of construction and inject £827 million into Scotland’s economy during its life.”